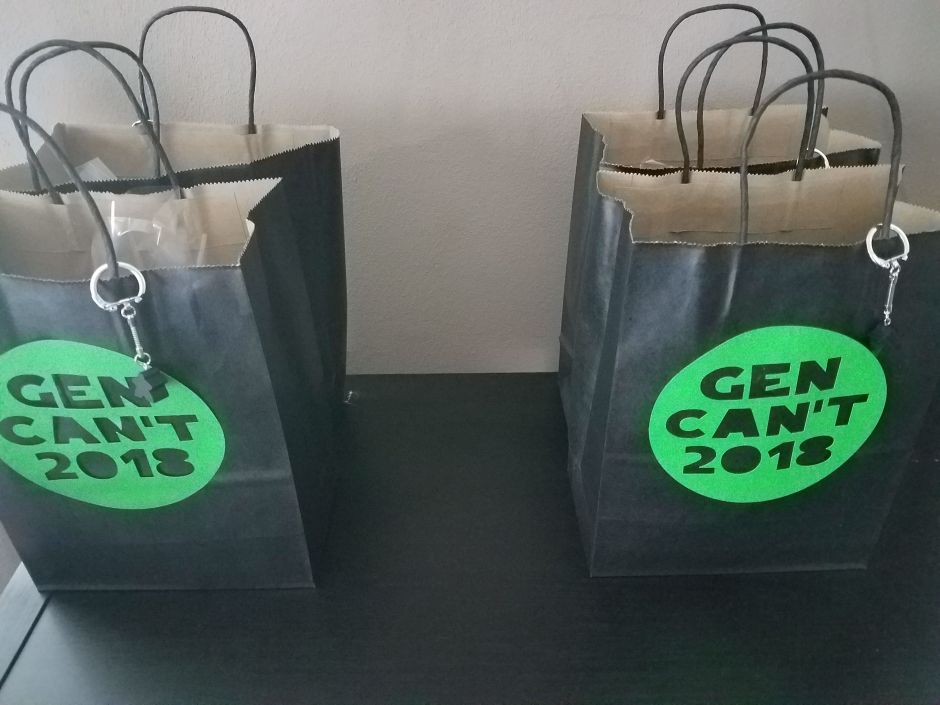 For the past three years Amber and I have attended Gen Con, but this year due to time constraints and a lack of extra vacation time, we weren’t able to make it. So, to take our minds off of the fact that we were missing the biggest four days in gaming, we decided to host an unofficial Gen Can’t at our house with some of our favorite gaming friends! We usually host game days 4-5 times a year, but we went all out on this one.

We made badges and swag bags…

And we had some mini-contests to win prizes! Guess the number of dice in a jar, match the designer to their game (which stemmed from an inside joke about the time Amber didn’t recognize a certain game developer at our first Gen Con), and a set of logic puzzles reminiscent of the Gen Con Puzzle Hunt: 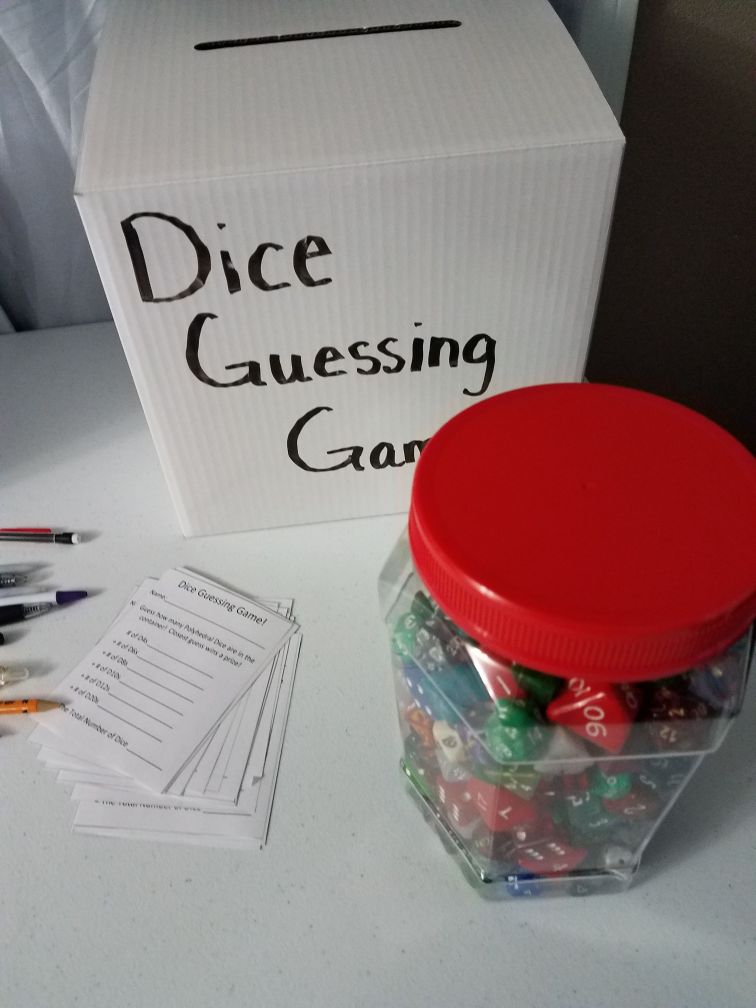 And of course it wouldn’t have been a convention without games! Here’s what I played:

Azul: A couple of our gaming friends who had recently gotten married (and who we consequently haven’t hung out with much lately) were interested in trying out Azul since they had heard good things about it. We were joined by another guy to make it a 4 player game. Everyone picked it up quickly and seemed to really enjoy it. Newly-wife realized pretty quickly realized how easily she could hate draft tiles and mess up her hubby’s plans. I wish I could blame that solely on their seating position, but I know that’s just her style (I still remember the time she mercilessly killed off his character as a guard in Room 25

). Despite that, I was able to pull off my first ever win of this game, thanks to scoring 19 points in the final round (two 7s and a 6), and picking up one of each of the bonuses.

This play also solidified my dislike for the mechanic of putting the discarded tiles in the box lid and then having to transfer those back to the bag once it’s empty… partially due to dropping tiles on the floor multiple times over the course of the game. I decided that it would be a lot easier to get or make a second bag to put discarded tiles in, and once the main bag is empty, draw from the second bag and use the main one for discards. I’ll have to remember to try that before the next time I play, because I think it could help cut out an unnecessary intermediate step in the game.

Viral: The rest of the con-goers were still busy solving a crime in Detective: A Modern Crime Board Game, so our foursome moved on to Viral, which was new to me. I’m not that big on area control games, so was a little leery of it, but it ended up being pretty fun. The idea of the game is that the players are different types of viruses trying to infect different areas of a body while keeping a low enough profile that they aren’t wiped out by the immune system and have to start over. I really liked the action selection/programming phase of the game — one of the big factors was that you only have one card corresponding to each region of the body, so you have to affect two different regions per turn, and because you don’t get discarded cards back right away, it’ll take another turn before you can attack a region again. So you end up having to get clever with movement or powers that can affect regions other than the one you’re playing it on. Another key mechanism is the tiebreaker track, which goes in order from last to first place, as sort of a catchup mechanic. I took advantage of that a couple of times to easily gain control of multiple regions with only a few of my pieces. However, I should’ve turtled more going into the last round, as I found myself in second place with only one virus left on the board, so I wasn’t able to be very effective. Altogether, this was a fun game and I’m glad I got to try it out, but it’s not necessarily a game I’d actively seek out in the future.

After that, we took a break for lunch (nacho/taco bar

) and regrouped. Since I had just gotten the upgrade pack from Kickstarter, we decided to all join in for a few rounds of our group’s favorite:

Werewords (Deluxe Edition): Werewords is without a doubt my most played game of 2017/8, with 81 plays logged, and probably a handful more that I didn’t account for. So it was a no-brainer to get the new Deluxe components. In actuality, there isn’t that much in the way of physical components to the deluxe edition: there are new role cards with improved art, along with several new roles – the Apprentice Seer (who knows what the word is if the mayor’s the Seer), Fortune Teller (who knows the first letter of each word, increasing by one each time the village doesn’t guess the word), the Masons (who know who each other are), Doppelganger (who copies another role), and the Thing (who taps another player during the night phase). We had a pretty small group, so of the new roles we only played with the Apprentice Seer, and later the Fortune Teller. The latter is pretty interesting, because based on the magic word(s), they could be getting a lot of information or not very much (such as S _ _ _ when the word was Sega). We found that in our 8-player games, the werewolves were winning quite a bit, either by causing the word to not be guessed, or by figuring out the Seer/Fortune Teller.

We also tried one of the other new features in the Deluxe edition, Speedwords. In this mode, the village has half the normal amount of time to figure the word out, but the Werewolves get to pick a letter in the word that’s displayed to everyone to give them a fighting chance. This also led to an interesting decision space — in our first game the werewolves picked a letter such that we were greeted by _ _ _ _ F _, to which Amber and I both blurted out “kung fu” (since what other 2-letter word starts with F?). But, that ended up being in the werewolves’ favor, since they figured that neither of us was the Seer, and voted for the other two non-Mayor players for an easy win.

The one major negative about Werewords Deluxe for our group was that we could not stand the new narrator’s voice. He sounded like a bad John Wayne impersonator

. I’m sure we’ll get used to it over time, it was just very jarring. Fortunately, that was only a minor drawback — the game was so great, we played it 11 times in a row!

Gearworks: One of our friends had recently gotten this interesting-looking game via Kickstarter. As soon as he said that the mechanics had a Sudoku element, my interest was piqued. I love puzzley games, and this looked like no exception. Ultimately the game is about trying to get parts to build contraptions by being the last to place a card in a row or column, but the placement ruled are where the puzzle comes in. In a column, all the cards have to be different colors, while in a row cards must be placed in either ascending or descending order. In addition, if you can place a card such that the next cards to the left or right and above or below add up (such as putting a 4 next to a 1 and 5 or an 8 between a 2 and 6), you gain a spark, which is a special in-game currency that can be used to buy new contraptions, re-enter a round after passing, or place a card on top of one already in the grid. This ended up being a medium-weight game in terms of “thinkiness”, and I enjoyed the puzzle quite a lot.

Ten Candles: By this time it had already gotten dark, and we were able to move onto the main event. Amber had requested a few weeks ago that we play a game of Ten Candles at Gen Can’t, so I read up on the rules and got everything ready. If you’re not familiar with the game, this is a horror RPG that’s more of a collaborative storytelling game, where players sit in a darkened room lit only by 10 candles. When they fail an action, they must blow out a candle, gradually darkening the room until only one candle is left, and everyone’s characters perish, ending the game. The only game I’ve ever played that was even close to this kind of experience was Dread, which is also a horror RPG in which checks are made not with dice rolls but by pulling blocks from a Jenga tower, with the main rule being that if you knock over the tower, your character dies. That experience was at a convention last year with a really excellent GM (Bryan Nash, if you ever get a chance to play with him at a con), and I was nervous that I wouldn’t be able to do the game justice.

The setting of Ten Candles is that 10 days prior to the start of the game, all the natural light in the world (the sun, moon, and stars) went dark. Five days later, They came. The nature of Them is different in each game, with the only common feature being that They hate (and possibly fear) light. During character creation, one of the players has some say in defining Them — in this game those duties went to Amber, who said that They worship the Old Ones. So, I tried my best to make the game Lovecraftian — creeping horrors lurking just of sight, impossible architecture, and other things to cause the characters to doubt their own sanity. In the scenario we were doing, the characters were the last ones left at a fallout shelter, where dwindling supplies cause them to strike out in search of greener pastures at a local military base. A few of our 5 players were a bit apprehensive, having never played RPGs or other storytelling games before, but before too long everyone was getting into it. I tried to manufacture conflicts and create scenarios that would cause players to burn through their traits (which is a mechanism in the game for rerolling checks), and getting to their Moments (some driving purpose behind each character to give them hope) and push them to their Brink (a dark secret which can be embraced for more powerful rerolls), but only one character got all the way through their cards. I wasn’t sure if that was common, or maybe just a side effect of having a full 5 players. Either way, everyone seemed to enjoy themselves, even though their characters ended up insane, dead, or lost in the void of time and space. I’d love to play Ten Candles again, but as a player rather than the GM. While being encouraged not to prepare anything or plan ahead makes running the game easy in theory, it’s a bit stressful to keep things running smoothly without a framework of what should be happening (at least for me). Still, it was certainly a great experience, and an excellent end to this year’s Gen Can’t festivities!