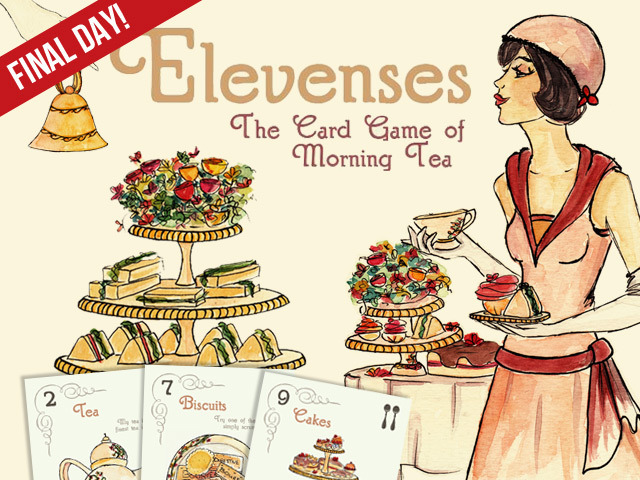 It’s the 1920s and like many socialites of the period, you strive to host the best morning tea for your friends; after all, it’s how you keep your name in town!  Your servants are bustling around making sure everything is just so when you realize that your best pieces are missing!  You peer out the window to see that the socialite across the street has send one of their servants to switch your pieces out with something you already have!  Now it’s time to scramble, making sure to you have the best prepared party so that all the best in town come to your morning tea, and not the tea of that nasty neighbor. 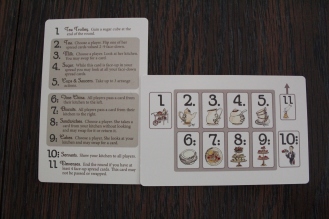 In Elevenses, each player starts off with the same eleven cards, each with a number (1-11) and a title.  The only thing that differentiates the set is that each player gets a different color on the back of their cards (red, blue, green, or yellow).  In addition, each player receives a summary card which details what all the cards do as well as the layout of the cards.  Finally, the sugar bowl card is placed in the middle of the table to hold the white sugar cubes, which are used for scoring.  The game is played over several rounds, and the first player to get 5 sugar cubes is the winner!

At the beginning of each round, each player shuffles their 11 cards and lays 8 of them face down on the table in two rows of 4.  The remaining 3 cards are kept in the player’s hand.  The cards on the table are referred to as a player’s spread, while those in his or her hand are the kitchen.  The round is now ready to begin!

On a player’s turn, he or she may do one of two things.  The first is to play a morning tea 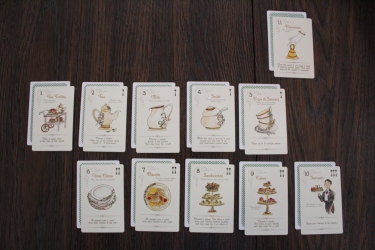 card from their hand.  The card is played in the corresponding area of the spread — the 8 face down cards represent the spots numbered 2 through 9, with 1 and 10 off to the sides, and 11 being played in the middle of the table.  So by playing one of the numbered cards from your hand, you replace one of the face down cards with the given card and pick up the card that was occupying its spot.  You then carry out the action on the card that was played.  The cards allow you to do things such as flipping other players’ cards face down, exchanging cards with other players, having all players pass cards to the left or right, and so on.  In general, the lower the card’s value, the more beneficial the action is for you, and vice versa.  Of course, since there isn’t a spot corresponding to the 1 and 10 cards, when you play them out to your spread, it decreases your hand size by a card.  However, they are fairly powerful — the 1 card gets you an extra sugar cube at the end of the round, regardless of the outcome, and the 10 card is worth 3 spoons.

Spoons are the measurement of points in the game.  Each face up card in your spread (with the exception of 1, the Tea Trolley, is worth a number of spoons from 1 to 3.  Cards 2-5 are worth 1 spoon, 6-9 are worth 2, and card 10 is the only one worth 3 spoons. 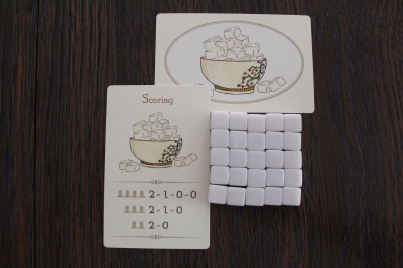 At the end of the round, the player with the most spoons wins 2 sugar cubes.  In a 3- and 4-player game, the person with the second most spoons also gets one sugar cube.  The end of a round is triggered when any player plays their Elevenses card, which they can only do if they have four face-up cards in their spread.  However, if you have four face-up cards but aren’t leading in spoons, you may want to save your Elevenses card in the hopes that you’ll be able to score more spoons before someone else ends the round.

But wait, you might say, I thought there were two things a player can do on their turn… and how would you know what any of your facedown cards are in order to make the best moves?  Well, dear reader, to answer both of these questions, let’s talk about arrange actions.  Instead of playing a card on his or her turn, a player can instead choose to take up to 2 arrange actions (as well, the 5 card, Cups and Saucers, allows a player to immediately take up to 3 arrange actions).  When a player takes an arrange action, he or she places a card from their kitchen (hand) face-down in their spread and picks up the card that was in that spot.  By doing this, the player can remove cards they don’t want to play from their hand as well as know what some of their face-down cards are.  In addition, if a player has the value 4 card, Sugar, face up in their spread, they may look at any of their face down cards at any time.  With these actions and cards, the game can be quite strategic.

The game ends when any player has 5 or more sugar cubes at the end of a round.  In the event of a tie, players may kiss on the cheek and share victory, or they may continue playing until there is an outright winner.  Either way, players will have had a successful tea-time!

This game came to us for multiple reasons.  I was tickled that it was a game named after a hobbit meal time, the idea of hosting a tea party was delightful, and it fulfilled our need to have more light games for at least two players.  We were definitely not disappointed by this.  The game play is fairly easy and doesn’t take long to teach or learn, however, I did find myself having quite a time wrapping my head around the numbering on the cards.  The ones that you have laid out on the table are 2-9, not 1-8; it took me a couple of rounds to really get this numbering down, but it gets more understandable after a few rounds of play.  While the theme is what initially drew me in, I know not everyone will want to play a game about hosting a tea party, although some groups may surprise you.  While we were at a local con last year, a group of big, burly looking men busted this game out behind us and had quite the time playing it, so there’s that.  The components are mostly cards with a few plastic cubes to represent the sugar/points, which is just fine in that it keeps the game small and more compact.  This game works really well as a 2 player game and seems to work just fine as a 3 and 4-player game as well.  Overall, a nice light game to fill the time.

I find Elevenses to be very much in the same vein as Love Letter – You have a few cards in your hand that you can play, each card has a different associated action, and winning a round gets you small tokens, of which you have to collect a certain amount over several rounds in order to win.  However, I think this game has a bit more meat than the really light filler games.  Because you get cards from your tableau whenever you play a card out, you have some control over what cards come into your hand, and with passing cards back and forth between players, you can play out one of your opponents’ copies of a card and hide your own copy of that card face down in your tableau somewhere so they can’t get it back.  Overall the gameplay is easy enough to pick up, while still being engaging and fun for the 20-30 minutes you’ll be playing.  As I said, it would be a good step up from something like Love Letter for newer gamers.  The theme is certainly pretty unique (I don’t know many other games about tea-time), though it isn’t necessarily that integrated with the gameplay.  Why does Fine China make everyone pass a card to the left and Biscuits make everyone pass a card to the right?  I don’t know, that’s just how they work.  That said, the separation of theme and gameplay might actually be advantageous to those who may be turned off by the theme — they can treat the game as more-or-less abstract and not get too caught up in the tea party aspect of it.  The artwork on the cards is relatively simple, but fits with the time period of the game and conveys what each different thing is, and aside from the cards the only other component in the game are the plastic “sugar” cubes, which are a good size and satisfying to play with.  The game plays well with all numbers from 2-4, and doesn’t change that much based on player count aside from having a different number of people to compete with.  My biggest gripe about the game is the layout of the starting cards in your tableau.  Because the 1, 10, and 11 cards are special, you have two rows of cards that go from 2-5 and 6-9.  Invariably when people start playing the game, they will mix up which cards correspond to which number, thinking the rows are 1-4 and 5-8 (which I’d say is a reasonable assumption.  I know the reason they did this is because the cards are arranged in order by the number of spoons they provide (except the Elevenses card), but I really wish the Tea Trolley would’ve been made #9 and the 2-9 cards shifted down by one so that the layout was more user-friendly.  Other than that minor issue, though, this is a good game and makes for a great filler game!

Buy Elevenses on CoolStuffInc for $9.99

We Are An Amazon Affiliate!

What does this mean?  Well, some of our posts contain links to things on Amazon we really love.  When you click these links and purchase items, Two Board Meeples gets a percentage of your purchase with no extra cost to you!  We participate in this program to help fund more great posts!  Thank you for your clicks!