Your fingers click across the typewriter, a flurry of letters fly across the paper as you rush to make your deadline.  You pause.  No time for writer’s block now, you think to yourself.  Frantically, you push around the papers on the desk.  All the notes you’ve jotted down are beginning to pay off as you arrange them again and again, creating the words you need to finish the next great American Novel!

Paperback is a deck building card game where the players build words to create novels and earn points.  Words unique to your theme and longer words can earn you extra points.  Will you be the player to create more novels before anyone else?

Since Paperback is a deck-building game all about forming words, it should come as no surprise that the majority of the cards in the game prominently feature letters.  All letters from A-Z are represented, as well as several combinations of two letters.  Each player starts with the same 10 cards: R, S, T, L, N, and 5 wild cards that can represent any letter.  As well as the cards in each player’s deck and hand, everyone has access to a common card, which is typically a vowel (there are some other common cards, which will be described later).  Using just a hand of five cards and the common card, players must craft the best words they can! 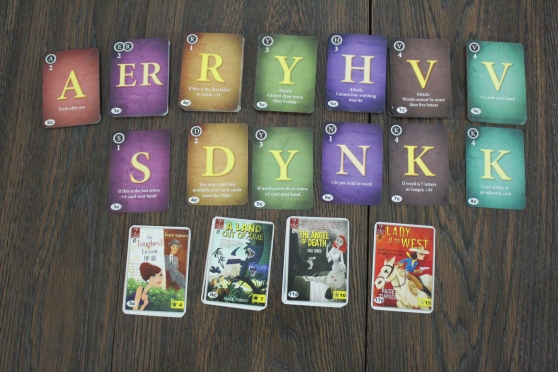 Of course, this wouldn’t be a deck-building game without any deck building, so there are obviously additional cards players can buy to add some variety to their decks.  Letter cards range in cost from 2¢ to 10¢, with each value having a different color (8, 9, and 10 cent cards are grouped into one category).  The 2-cent cards are all vowels that can be used once and are then removed from your deck, but all of the other values contain all manner of consonants, vowels, and 2-letter combinations.  Each value of card is shuffled separately and set up in a draw pile, along with one card from each pile placed face up on the table.  This way, there are two available cards for each value (except 2¢) that players can buy on their turn.  In addition to the letter cards, there are Fame cards that range in price from 5 cents to 17 cents, which act as wild cards in a player’s deck and are worth points at the end of the game.  Buying Fame cards is one of the few ways to get more points, so it should be done whenever possible!

On a player’s turn, they use the cards from their hand to create the best word they can.

The best word is typically the longest, but there may be other combinations that give you more points.  All letter cards have a value in the top left corner (wild and Fame cards are worth 0) — if you use a card in your word, you get that many cents to spend on new cards.  You can buy as many cards as you’d like, as long as you can pay the cost.  In addition to the monetary value of each card, many letter cards have special abilities that can help you out.  These abilities range from letting you draw more cards to giving you more money for playing certain cards or even attacking your opponents, limiting what they can do on their turns.  With strategically played cards and special abilities, you’ll soon be able to buy even the most expensive Fame cards!

In addition to buying cards with the value of letters played in your word, there is another way to gain new cards for your deck.  Remember the common card that everyone is able to use?  Well, the first player who is able to make a 7-letter long word can gain that common card for their deck, uncovering a new one.  Then, the next player who can make an 8-letter word gains the new common card, and so on.  If someone is able to take the last common card by making a 10-letter long word, the game ends immediately.  In addition to the common cards containing vowels, there are two special ones.  Dyslexia allows players to reverse the order of letters on cards showing two letters (so, “RE” could become “ER”, for instance).  Spacebar allows players to use their letters to form two separate words, gaining the points from both.  In addition, common cards are worth 5 points each, so make long words to gain them if you can!

There is one last facet to Paperback — Powers, Themes, and Awards.  Powers can be dealt 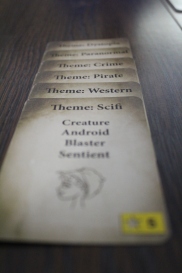 to each player at the beginning of the game and give a little extra diversity to the gameplay.  For instance, there is a power where if the player draws a hand with no wild cards, they may draw an extra card.  Themes and Awards give another way to earn points besides from Fame cards and common cards.  For each of these card types, you’d randomly select one for the game.  Themes represent different genres of fiction such as Sci-Fi, Western, or Paranormal.  A player can claim the Theme card by making a word matching the given theme (as long as all players agree that it falls under the theme).  This card can move around the table, so whoever is holding it at the end of the game gets its extra points.  Awards, on the other hand, are only awarded at the end of the game.  These are given for things like having the fewest wild cards or the most cards overall in your deck at the end of the game.

As aforementioned, the game ends after someone claims the last common card.  However, it can also end after two or the four stacks of Fame cards have been depleted.  In either case, each player totals up the number of victory points from their Fame cards, common cards, Awards, and Themes.  The player with the most Fame wins! 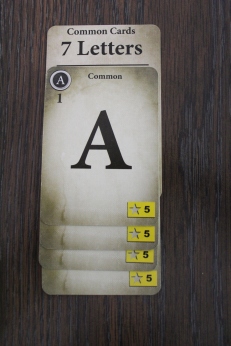 I have a love hate relationship with deck builders.  There are many times in a deck building game where you are trying to buy card upgrades and getting the “lesser” versions out of your deck.  This game, however, doesn’t necessarily use that element of DB games, which is a bit of a relief to me, as weeding decks is not something I’m good at doing.  I’ve always liked word games like Scrabble and Boggle, so add the better parts of deck building to a word game, and you’re cooking with gas!  The game can be a bit overwhelming to look at all set up, but really the game play isn’t terribly difficult, especially if you’ve played games like dominion where you’re buying cards from a pool.  The theme of novel writing is there, but a bit thin; I mean, you are writing the words out and the themes are a nice touch, but I usually try to capture the themes at the end just as a means to gain those few extra points.  I think the biggest downfall of this game is the scalability.  When I first tried this game, it was really not enjoyable.  We played five players and the turns were confusing, it was hard to keep track of the attacks, and it was just taking entirely too long.  I was able to admit to myself, however, that this was just a bad experience and gave the game another shot with fewer players.  After playing two and three player games, I feel the game plays most optimally with three players.  This game, which I started out loathing, became a nice go to for me, so much so we ran a tournament in our regular gaming group.

I really like deck-building games and word games, so Paperback was a no-brainer for me to try.  I think this really is a good game mechanically, merging deck-building with games like Scrabble.  Trying to make words with the letters you draw while at the same time making the best use of the special powers of your letter card is super fun.  The card art is good, especially the Fame cards, which all look like the covers of, well, paperbacks.  My biggest complaint about the game is that it really doesn’t scale well at the higher player counts.  The first time we played this game, we had a full complement of five players and things got very chaotic, especially when multiple players had attack cards in effect at the same time.  That said, this is still a really great game if you limit it to two or three players.  So, if you’re in the mood to build some words with a bit of deck-building as well, give Paperback a try!

Buy Paperback from Fowers Games for $24.99