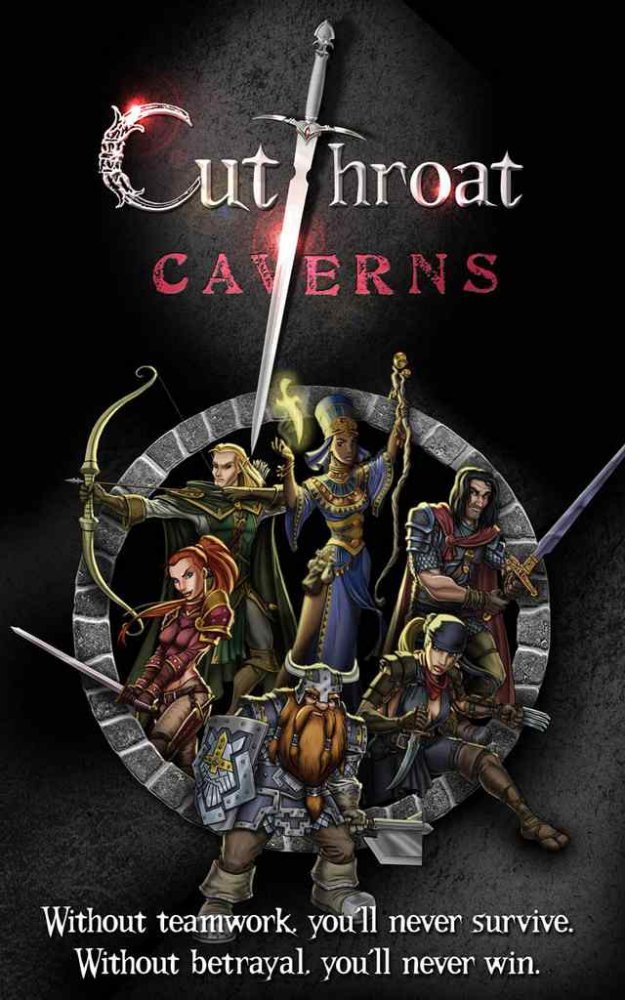 When you think of a party of adventurers, you think of a group of friends valiantly questing together, watching each others’ backs and sharing equally in the fame and glory.  At least, you used to think that.  Now you realize that bands of adventurers, who are actually usually strangers that met in a tavern and are united only by bloodlust and lofty aspirations, are just as likely to stab you in the back as to protect it.  And forget sharing in the glory — no, in the Caverns, only the most wily adventurer will get that fame.  Everyone else will likely be quickly forgotten in the annals of history — if they even made it out alive!  Before getting yourself into this mess, you probably should have paid more attention to that old saying: “Without teamwork, you will never survive.  Without betrayal, you’ll never win.”

Welcome to Cutthroat Caverns.  This is a semi-cooperative game in which the players take on the role of adventurers, such as you might see in a typical D&D campaign.  However, the group is only working together inasmuch as they need help defeating monsters and challenges.  Because every monster the team faces only awards prestige to the player who landed the killing blow, there’s bound to be some backstabbery as players fight for that position.  But beware — too much messing with each other and everyone is bound to end up dead.  But in the end it’s all good fun, because after all, what’s a friendly game without a little sabotage?

In Cutthroat Caverns, each player is going to take on the role of a different adventurer trying to recover the Sacred Item of Unimaginable Marvel with the “help” of their colleagues (the other players).  To begin, each player should choose one of the six characters and take the corresponding card.  A glass bead that measures the player’s Life Points (LP) starts on the 100 space.  Shuffle up the main deck of Attack/Action/Item cards and deal out seven to each player.  Shuffle up the deck of Encounter cards and deal 9 facedown into a pile — these are the encounters you have to survive it you’re to win the game.  Lastly, set aside as many Initiative cards as there are players (so, for example, if playing with 4 players, cards 5 and 6 go back in the box).  You’re now ready to play!

The game is played out over a series of at least 9 encounters (there are ways for additional encounters to get added to the deck) that players must contend with.  Encounters are mostly monsters to fight, though there are some puzzle rooms and other challenges thrown in as well.  Fortunately, players are (at least somewhat) well-equipped to deal with these challenges.  The main deck contains Attacks, Actions, and Items that can all be used to combat encounters.  Attack cards are most prevalent in the deck.

These all have a red burst at the top, usually with a number inside.  The number represents how much damage that attack will do if it goes through.  Some attack cards have a character’s portrait on them — if you’re playing as that character you get to do double damage with the attack!  Other attack cards have special effects such as being able to steal an item from another player, cut the next two attacks in half, or even just do nothing (which is sometimes a good tactical maneuver).  Also in the deck are Action cards, which are identified by a blue oval around the title.  These cards are played directly from a player’s hand and have various effects like causing another player’s attack to miss, doubling or halving damage of any Attack card, or even canceling out another Action.  Finally, there are Item cards, denoted by a green gem around the title.  Item cards are always placed face up on the table in front of a player when drawn, and can be played from there.  Many items are Potions, such as the Potion of Healing or Potion of Strength.  These cards can only be played between encounters.  The only item that can be used during an encounter is Alchemist’s Fire, which deals 30 damage to all monsters and 10 to each other player.

Now that you know what kinds of cards can be in your hand, it’s time to get back to facing that encounter.  As aforementioned, most encounters involve combat against a monster (or a group of monsters). 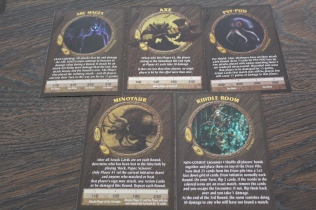 The encounter card shows the monster, the special rules for its encounter, how many life points it has (which usually scales to the number of players), and who/how it attacks.  Encounters almost always have some special rule, such as taking random cards from players’ hands when they’re damaged, only being damaged by attack cards over a certain value, or involving multiple enemies.  The latter makes for some of the most interesting (and sometimes frustrating) battles.  Whenever there are multiple enemies, they are represented by tokens, and can be attacked individually by players (and usually give prestige for each token defeated rather than the encounter as a whole).  Almost all monsters deal some form of damage as well.  Damage can be based on initiative, in the form of “Attacks Players #1 &2 for 10 LP”, or it can be based on other rules, such as damaging the player who did the most damage to the monster that round.  Either way, monsters will be attacking everybody, so it’s usually best to try to defeat them as quickly as possible!

Non-combat encounters are an entirely different kind of beast.  Well… not a beast, but something else to deal with… you know what I mean.  These encounters represent rooms that are trapped, or contain puzzles, or something else for the team to deal with.  One of these is the Riddle Room, where all cards from players’ hands are shuffled together and dealt out into a grid.  Players then have to play a memory game, flipping up two cards and looking for a match.  If a player does this, they escape, but if they fail after three rounds, they are trapped and take damage.  Non-combat encounters add some variety and mix up the encounters so sometimes you’ll be using your brain rather than brawn.

Finally, now that you know what you’ll be up against and how you’ll deal with it, let’s go over the game flow.  At the beginning of an encounter, the top card of the encounter deck is revealed.  The monster gets Life Points based on the number of players, which are tracked on the main board.  Then, initiative cards are dealt out and the encounter begins.  Each round, players simultaneously select the Attack card they are going to play that round and set it face down. 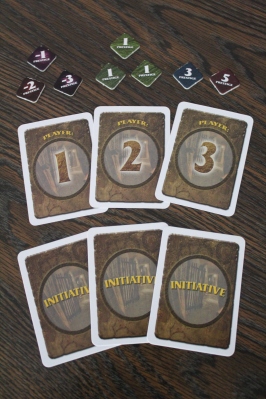 Then, in initiative order players reveal the Attack card they had set.  If the revealed attack card is enough to kill the monster, it is defeated and that player gains prestige for the encounter.  If not, the attack card is added to the “damage stack” and the next player reveals their card.  At the end of the round, all the damage in the stack is added up and subtracted from the monster’s LP.  Then the monster attacks — if it’s based on special rules such as who damaged it the most, that attack happens immediately.  Otherwise, for initiative-based attacks, the initiative cards are shuffled up and re-dealt, and the player(s) now holding the specified initiative card(s) are attacked.  Because you don’t know who will be taking the damage from initiative-based attacks  until they happen, you may want to deal with those monsters quickly!  Then, all players draw one card and a new round begins.  This continues until the encounter is defeated.  The player who dealt the killing blow gets the prestige for that encounter.

After an encounter is over, players have the opportunity to discard any unwanted cards from their hands and draw back up to 7.  This is also the time to use any potions or other items.  Then, a new encounter begins!  Once players have defeated the last encounter in the deck, the game is over and the player with the most prestige points is the winner.  The game has an interesting tie-breaker though — if two or more players are tied for the highest prestige, another encounter card is drawn and dealt with in the usual fashion.  This continues until there isn’t a tie.  In Cutthroat Caverns, there can be only one winner.

“I’ll play anything with Cutthroat in the name.”  Okay, so it’s not exactly 100% true, but I do like semi-cooperative games in that I can make a friend and the BRUTALLY BETRAY THEM!  This game is only semi-cooperative in the fact that we’re fighting over the same thing, and with luck, some of the cards can tip in and out of your direction.  Overall the mechanics of the game are fine; you play a card and react to the monster, which can have different results depending on the monster and your initiative order.  The theme works well the way the game is set up, there are the typical characters you would see in the dungeon crawl and the monster cards represent both the fighting and puzzles you may do in an RPG.  However, one of the expansions is actually an adventure module, which I’d like to see how that changes the way the game is played..  The game plays with only 3-6, so we really only play this game on game nights and it fills up pretty fast; it seems to do well with 5-6.  Overall, I like this game and enjoy when we play it, but while I typically like games with a bit of luck, I think it can be a real disadvantage in this game.  Especially because it can cause player elimination.

Cutthroat Caverns is a game that we don’t get to play quite as much as I’d like, due to the fact that you need at least 3 players to play.  However, whenever I do get a chance to play, I always like the chaotic nature of the game and its backstabby nature.  One thing I’m not overly fond of is that the rules can be a bit fiddly at times, especially the re-dealing of initiative cards before initiative-based attacks, which always seems to confuse people for the first couple of rounds.  Overall, though, once everyone gets into the swing of things, they see why the game is called “Cutthroat Caverns” and not “Fluffy Bunny Caverns”.  I really like the variety of encounters and how each one plays a bit differently, especially the non-combat encounters which are totally different.  The art on the encounter cards is good, though because of the multitude of artists not always consistent.  The theming in the game is great — it really captures the feel of a dungeon crawl, though with a bit more treachery than one might expect.  While I’ve never tried it, I feel like playing Cutthroat Caverns back to back with The Red Dragon Inn would be a blast.  Altogether, if you’re looking for a game where everyone’s working together, but only kinda, Cutthroat Caverns is the way to go.

Buy Cutthroat Caverns on CoolStuffInc for $22.99

One thought on “Board Game Review – Cutthroat Caverns”