Hi, Ethan here!  Amber took a personal day this week, so I’ll be doing a solo recap of our game night.  In addition I played just one game for the duration of the meetup, so it may be a pretty short report.  So let’s not waste any time and get right to it!

As you may have noticed, I have a few idiosyncrasies when it comes to gaming.  One of these is that I keep a list containing all of the games in our game collection which haven’t yet been played, and all games (whether in our collection or not) that I’ve only played once.  The reason for the latter category, dubbed “one-played” games, is because I want to be able to play every game at least twice before rating it or completely forming an opinion on it, since there are definitely bad gaming nights or gaming sessions that can color one’s judgement.  The reason I mention this is because the game up for discussion today has been on my “one-played” game list since January 6, 2015.  And though our friend (and occasional Two Board Meeples contributor) Rob has brought it for about the past 15 consecutive meetups, there just was not a good opportunity to play it.  Until this week, that is, when we finally got a chance to play…

Belfort is a medium-to-heavy-weight Euro game which consists mainly of worker placement and area control.  It has a unique pentagonal board, and as you might expect can play up to 5 players.  We only played with 4, however: Rob and I, who had played before, and Jesse and Becca who had not.  There are quite a few rules and things to know for Belfort, so Rob’s explanation took about 20-30 minutes, but once completed everyone seemed to know what they were doing and was ready to play.  As I mentioned, Belfort is partially a worker placement game, and as it takes place in a fantasy village, the workers are elves and dwarves.  In each round, play proceeds around the table with each player placing one of their workers or passing.  Initially there aren’t many places to use workers:

They can either go to one of the randomly-drawn guilds in the town, to the recruiting office to get another worker of the same type (elves beget elves and dwarves beget dwarves), or they can be used to change the turn order later in the round.  Once you have placed all the workers you want to, you can pass, and your remaining workers can generate resources – wood from elves, stone from dwarves, metal from one of each, and money from either.  After collecting resources and income from any buildings you may have, and paying taxes (more on that later), each player, in turn order, gets an action phase.  This is the part of the game when players may build buildings in the town, placing one of their markers on a corresponding building on the board.  It should be noted that there are 5 copies of each type of building, distributed evenly amongst the 5 districts on the pentagonal board.  The other actions a player can take include buying or selling resources at the trading post or buying gnomes, which are a special type of worker who can unlock additional abilities from the buildings a player may have built.  Finally, in rounds 3, 5, and 7 there is a scoring phase, which are the only times throughout the game the players can earn points.  Players get points for having the most (or second-most) of each type of worker, and they also score for having majorities in each of the 5 districts — this is where the area control aspect of the game comes into play.  However, scoring a lot of points comes at a price, because players are taxed every round based on the number of points they have (1 coin for 6-10 points, 2 coins for 11-15 points, etc.).  Then at the end of the 7th round, the person with the most points wins!

So our game went very well.  I managed to get an early foothold in four of the five districts as well as a lead in gnome workers.  However, I was constantly in a state of poverty (unfortunately only one of my buildings generated any income) and as such was never able to afford the action spaces to generate more elf or dwarf workers, as they cost two coins each.  Jesse and Becca on the other hand were both able to get a few extra elves, and Rob focused on just two districts but was able to place a lot of buildings in just those two.  My strategy meant that in the first two scoring rounds, I took an early lead, but in this game that’s not always a good thing.  The taxation really hit me hard after the fifth round, when I was just past 30 points and needed to pay 6 coins in taxes.  Unfortunately I didn’t have that amount and had to make up the difference by losing points.  The other rough thing about the taxes is that they’re collected before the building phase, so I never had any coins to use for resources, gnomes, or extra building cards, which killed me in the last two rounds.  So If this experience taught me anything about Belfort, it’s that an early lead is not always a good thing; it’s better to save up and play a lot at the end if you can.  The only limitation is that you can only hold 5 building cards in your hand at a time; other than that there isn’t a limit on resources or money, so it could be possible to save up, playing only a few buildings over the course of the game and then doing a massive move on the last round to gain a lot of influence all over the board. 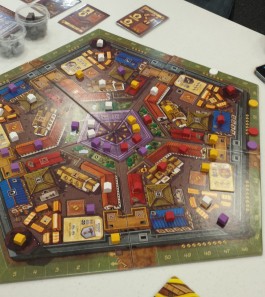 This is part of the reason I like to play all games at least twice — for a lot of games you need to play them multiple times to really get how to play and what the best strategies might be.  You may do well on the first game, either by luck or by a strategy that your opponents didn’t see but can be easily countered, and then in the next game not do nearly as well.  Needless to say, I didn’t do that well in this game — Becca came in first, narrowly beating Rob by one point, then I was two more points behind and Jesse was four points behind me.  As you can see, scoring in Belfort tends to be very tight, which is something I really appreciate in Euro games.  As counter-intuitive as it may sound, I find winning by a narrow margin much more satisfying than completely crushing your opponents by dozens of points.  And even when I don’t win, I have a lot of fun playing, which is exactly what happened on this Thursday night gaming session.  We introduced a couple of gamers to a new game and I was able to cross Belfort off of my “unplayed and one-played games” list.  All and all, it was a great way to spend a few hours — having fun and playing games with friends!